When Freddy Hall sings out “I’m just getting started” on the seventh track of his third studio album, DAZY, it rings like a statement of fact rather than a hopeful lyric on an undeniably upbeat song.

Try not to dance to “Newest (So & So) [featuring Ximone Rose].” It’s the kind of track that’ll bring a smile to your face, and at least force you to tap your foot if you’re sitting down.

It’s a radio-hit just waiting to be turned all the way up.

DAZY dropped November 5, and I already am addicted.

So, before I dive into a review of Freddy Hall’s DAZY, I need to go back in time to a moment that I feel personifies Freddy, who some might know, and some might not know, is actually one of my best childhood friends.

Let’s backtrack for a moment…

It was northern Virginia in 1996 when we were air-jamming out to Nirvana in his parent’s TV room. I was on the drums, while Freddy was slaying his air guitar. We were barely 12 years-old, but even then, we knew what we wanted to do when we “grew up” — Freddy wanted to be a musician. I wanted to be a writer.

Fast forward about 13 years, and fly over to Boulder, Colorado.

In 2009 Freddy was coming through Denver on tour with the Broadway-off-Broadway show Spring Awakening, of which he was a guitarist.

He was well on his way with the “Doing,” while I was still stuck in the “Trying.”

More on that here: Do Less.

While Freddy was literally willing his dreams of becoming a musician to life, I was dejected, and struggling to find my voice as a writer.

We were strolling down Pearl Street, catching up on life, and eventually walked into the Boulder Book Store.

Break for Shameless Self-Promotion: As of several weeks ago, the Boulder Book Store is carrying my novel Bolder Dreams.

I was scanning over their collection of leather journals, but couldn’t bring myself to buy one. Freddy asked me why I couldn’t do it, and my reply was: “those are for real writers…”

A few days later we met up before he headed off to another big city to jam out with Spring Awakening, and he left me with a wrapped gift.

Freddy bought the journal I was eyeing a few days earlier, and inscribed it with words I still remember.

“Never stop writing. Even when you fill this book! — Freddy“

So, long story short, I obviously never stopped writing. (This blog is proof of that.) 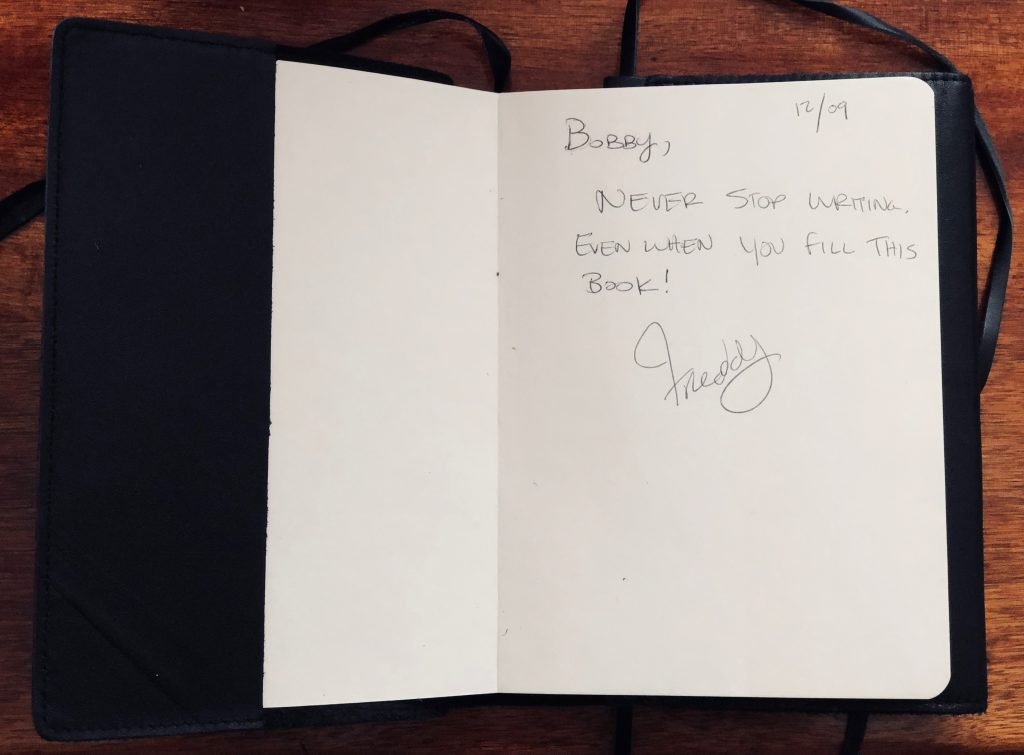 I had to re-tell that story because I really feel that’s quintessential Freddy Hall. He believes in you, even when you don’t believe in yourself. And through that positive action, more comes back.

And it clearly has for Freddy.

Side Note: Yes, I hoard all my journals. Even when they’re over 12 years-old…

That sort of hopeful optimism has oozed into his music over the years, and it’s just what this world needs more of.

I’ll admit, it’s easy to be a fan of your friend, but Freddy has always been a powerful storyteller, and a dazzling lyricist.

From older songs like “Lullaby” and “Who Am I?” from his Wander Years album, to “Marigold in December” and “All That I’m Good For” from Nothing In The Open, and I could easily go much deeper by diving into his Blue Jay Walking catalogue — a few CDs of which I still occasionally jam out to…

His latest album DAZY is something I’d be raving about even if I didn’t actually know the musician. It’s cohesive; the kind of album that is so intricately put together, like a well-sewn book, it reads fluidly from left to right, and when you’re done, you go back to the beginning.

DAZY is proof that he’s mastered his craft, on guitar, his singing, and his lyrics. Freddy created a world that you only notice when listening to his music. And when the final notes descend, you’re left missing that world.

While some of his earlier work hinted at Freddy’s talents, DAZY puts the evolution of Freddy Hall on a glittering display.

(For those only wishing to read the album review, I apologize for the heart-tugging story above…)

DAZY‘s opening track “The Bad Ones” kicks off with a seductive drumbeat that gets the ball rolling down the hill. Freddy wastes no time weaving in the common themes throughout the album: love, and coming to terms with all the complexities of our own psychology. It shines a bright, hopeful light on even the most dire of situations. Whether it be requited or unrequited love, DAZY tugs at your heart early as Freddy croons out “I’m always falling in love with the bad ones… The good ones never keep…”

“I’m Not Gonna Take You Back (featuring Aneese Folds & Marques Walls) sticks with the theme, plucking at your heart with a finger. Drummer Marques Walls creates a flirtatious rhythm on the hi-hat that begs you to dance along before the song ascends into a catchy chorus that most who have loved and lost could relate to — Freddy sings out “I’m not gonna take you back, I’ll make you wish that I would ask you to…” to a bluesy guitar riff.

“Something Good” is fun and hopeful, written in a time of desperation — during quarantine. Like most of the tracks, it’s a feel-good song with an upbeat tempo. Freddy sings out “I don’t need much, I just want something good,” which resonates across the world when you consider the past few years worth of bad news and deteriorating hope. Everyone just wants something good to hold on to, and “Something Good” does just that — it’s a mood-enhancer that’ll get you through any storm, like being quarantined inside for months on end and running out of toilet paper. Add that Freddy created a dance for this song, and got an incredible amount of crowd support for the music video. Like the story mentioned earlier in this blog, “Something Good” is classic Freddy Hall: hopeful even in hard times.

And then there’s fourth track, “Feed the Fire.”

There are quite a few radio-worthy hits on DAZY, and “Feed the Fire” is definitely one of them. It’s bluesy, dark and brooding. The first few lyrics have to be the complete opposite of what DAZY is bound to do for Freddy Hall.

“Well, I fear I’m bound for nothing,” trickle out of Freddy’s mouth with such resignation, you want to talk him off the ledge. And then he continues with the question “I wonder if I’ll be forgotten. I wonder when I fade, will I even leave a change?”

I’ll go ahead and answer those two questions in the order of which asked: No, and a resounding Yes.

And then the beat drops, and Freddy croons out “Feed the fire!“as if tossing himself into one.

The song is a direct look into the mirror, addressing our demons face to face. The questions the song presents prompt direct responses. Rather than avoiding the darkness within, it confronts it. “Feed the Fire” quite literally, feeds the fire.

It’s commonly known as “shadow work,” and the music video — which is hauntingly beautiful — reflects that.

Later in this raging of a rock song Freddy whispers out “I’ll never be the one,” before wailing into a psychedelic, driving guitar solo that reverberates through the veins of the listener. You can’t help but head-bang.

“Feed the Fire” will make any listener surrender their ears for the 4:07 that it rocks out — it’s worth it.

And then DAZY gives the listener a bit of a breather after “Feed the Fire.”

The fifth track, “Forgiven,” is a much more intimate track with a intricate piano riff soothed over by Freddy’s voice that rocks you to sleep with a warm blanket by a cackling fire.

“Forgiven,” is a night-driving-song with the windows down and the music up, and passing cars and skyward light-posts. It’s an honest look inside of one’s faults. An olive-branch. It’s spilling the heart out on the page for all to see, or in this case, into a song.

“If I wasn’t there, enough… I’m hoping that I could be forgiven…”

“May Love Follow” follows in stride like a comma on the page rather than a period. It’s precisely placed on the album to keep the pace flowing. It’s a tranquil track that’s aired out and filled with Freddy’s serenading echoes. It’s a starry night of blues that prompts inward thought.

And then there’s the song I mentioned at the beginning of this blog.

When I wrote “It’s a radio-hit just waiting to be turned all the way up,” I totally meant it.

Freddy sings out the opening lyrics “I’m in a blaze of all your beauty” as if that’s exactly what the listener is feeling when this song plays out of the speaker, because this song is beautiful. And listening to it sets the listener ablaze.

Chalk-filled with gems of lyrics, this song has to be DAZY in a nutshell when Freddy sings out “I’m just getting started.”

It’s a love song that you can’t help but dance to like an ’80s movie-montage with leg-warmers and your arms flailing around above your head, or sing along to in the shower (like I did this morning…) It’s a feel-good groove that’s ridiculously catchy.

When Freddy sings “I can’t get you out of my brain,” that’s exactly what I’m thinking about this song.

Among the many great songs Freddy has created over the past twenty years, this has to be one of his best, if not The Best.

“Newest (So & So)” is followed by “Beggin’ For,” which is cheerful break-up song with a catchy guitar riff that makes you feel that the break-up was a good thing. This is easily an anthem of the once-broken hearted.

Freddy sings out “It’s you I was beggin’ for, now I know better.”

I could see groups singing along to this one over the break-up of an ex no longer worth grieving over.

Freed from the baggage of the past, Freddy whispers out “My worth renewed, my search for truth, my curse is through.”

And he caps “Beggin For” it with the line “Now I know much better.“

“We turn the lights off and and we stop talking, and listen to the drops on the ledge…”

“Let It Rain All Night” is a slow-song begging for two lovers to dance to. It’s the final slow-song of the night at Prom. The one you save for that special someone.

And it’s perfectly placed, as the final song on DAZY that Freddy sings along with.

Dayton St. closes out DAZY as an instrumental. It’s calm and cool, and extends the slow dance of “Let It Rain All Night” into the final chords of Freddy’s masterpiece of an album.

Call me a proud friend.

When I sat down to absorb DAZY  the word “impressed” couldn’t do justice to what I felt. I was amazed. I was thinking: Holy shit, I know this guy…. I was taken back to the time when he bought me that leather journal and inscribed those hopeful words.

If there’s anything that DAZY tells us, it’s that Freddy Hall is just getting started.